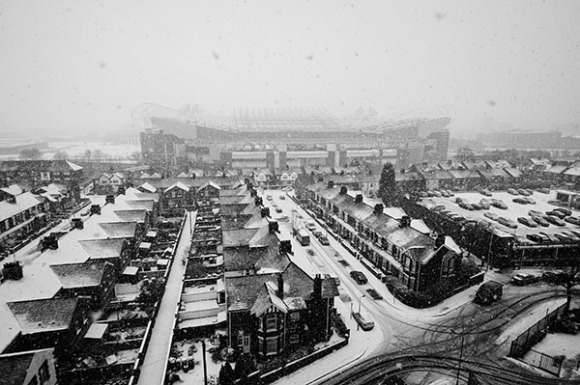 “Nani and Anderson having good days, Cleverley buzzing around like the anti-Gibson, Young looking instantly comfortable on the OT stage and Rooney back to his imperious best…it’s hard not to sound giddy.” This, dear reader, was me getting a little bit carried away in this column back in September – caught up in that early season period where we fleetingly looked untouchable and the possibilities seemed endless. It was a brief foray into positive thinking and it won’t happen again. So tonight (Matthew), we’re going to party like it’s 2005. Dooooom is back.

Even during those carefree days of our autumnal bloom, things didn’t feel quite right. Although the midfield was stringing some delightful, intricate passing manoeuvres together (think Bolton away), at times (like Arsenal and Chelsea at home) it resembled an ever-widening chasm. It just seemed churlish to dwell too much on that back then, as new faces appeared to be bedding in nicely and the team took on an air of free-scoring invincibility.

I expressed certain reservations to a mate post-Chelsea that if we didn’t make some changes, big problems might lie on the horizon in the shape of Liverpool and City. As it turned out, another lukewarm Anfield showing gave no hint as to the horror of what would unfold a week later in the derby. I’ve still not seen the last three City goals, nor will I ever – sitting through several first-hand accounts from traumatised friends and relatives was bad enough.

No apologies for leaving at 3-1, either. I suffered every second of the 5-1 back in ’89, slumped in the rapidly emptying Platt Lane as City celebrated. It wasn’t pleasant and isn’t an experience I’m intent on ever repeating. Top tip: the bar in the Cornerhouse makes for an effective, non-football, post-match hiding place.

Doom-laden United fans have had a tough time of things since the unexpected return to title winning form in 2007. 4 league titles in five years and 3 European Cup finals was much more than papering over cracks, it was the most sustained period of success in the club’s history. It’s hard to make a case for imminent disaster when your team is hoovering up silverware and (depending on if you can make sense of the financial reports) seemingly making inroads into paying off the mountainous debt our lovely owners saddled us with.

Yes, us doom-mongers have been quietened to some extent in recent years. Ongoing gripes about the gaping hole in central midfield have provided some respite but Green & Gold campaign aside, continued success on the pitch has neutered widespread complaint about overall lack of investment. We just sound like spoilt bastards when we moan. Other clubs would kill to be in our position, surely?  Just look at the pretty, silver trophies and shush…

Failure to qualify for the latter stages of the Champions League, however, means that questions are going to be asked. A favourable draw should have secured an easy passage into the last 16. So is it complacency, arrogance or lack of personnel that’s led us into the footballing purgatory of the Europa League?

It’s probably a mixture of all three. Qualifying year on year has seen the group stages reduced to something team and fans alike have started to sleepwalk through. People trot out the cliché about CL nights at OT being ‘special’ and possessing some sort of unique atmosphere. What atmosphere? The second half of the Benfica fixture was played out in virtual silence. I met up with a mate in town prior to that game, a home and away red for many years – and he genuinely thought we were playing Crystal Palace in the League Cup that night. Amusing in itself, but indicative of the disregard many of us hold for the group stages these days. Once upon a time, any participation in the European Cup was something to be cherished – early finishes from work and a lengthy session pre-match were de rigueur.

Of course it’s not just in the stands where malaise has been evident. On-pitch performances have veered between slack and shambolic, particularly at home. I’m never slow to criticise Nani, the guy infuriates me and his decision making makes me despair – but the decision to leave him out of the Basel home game was a shocker, particularly with Rooney being out injured. Although erratic, at least he’ll try to make things happen – even if they don’t always come off. Where others are ponderous and instinctively look to consolidate, he’s CREATIVE. Basel arrived at OT and for 20 minutes looked absolutely terrified, an hour later they were playing us off the park. They should have been smashed out of sight.

When the question of us struggling was raised in the press conference following dropped points vs Benfica, Ferguson was incredulous and dismissed the notion out of hand. Although a perfectly valid point given our laboured performances, to him the suggestion was ridiculous, insulting even. He obviously has continued faith in our enduring ability to do just about enough to get over the line as we’ve managed to do time and time again…only this time we fell short.

It’s only taken a couple of injuries for the known problem area of the squad to be exposed once more. Cleverley has proved a huge loss, one far greater than should be the case for a player with only half a dozen appearances to his name. Carrick, Park and Fletcher continue to labour through most games, in turns low in confidence/form, ability and fitness. Pogba and Morrison are presumably not considered quite ready yet – so consequently Phil Jones now finds himself a first choice central midfielder.

Fergie’s position on the matter is maddening. I mean, we all love the guy for what he’s achieved here and congratulations on doing 25 years and getting a stand named after you and all that… but what the fuck? Are we seriously supposed to believe that he’s truly content with this midfield? Under previous regimes he’s always spent big when necessary – the (spit) ‘value’ line trotted out in recent times just doesn’t add up. We are Manchester United and have always had to pay above and beyond the perceived market rate, whether that be £2.3M on Gary Pallister or £31M on Rio Ferdinand – both astronomical fees at the time. There was no mention of value then, it was ‘we needed this player, this is what he cost’.

If Fergie/Gill played a straight bat (ha!), simply held their hands up and said ‘look, we can no longer afford the going rate for the player we really need anymore’ (you can guess who I’m alluding to – the one beginning with ‘S’, always injured, allegedly after a private jet…or someone like him) then we could deal with it and at least there’d be some acknowledgement of the elephant in the room. It’s absurd to try and put a figure on ‘value’ in modern football anyway – it recently cost £40 or so to watch the reserves play Palace. That doesn’t strike me as particularly good ‘value’ either but we’re still expected to pay it.

So there we have it. Vidic out for the season, City top of the league, midfield still fucked, we’re in the Europa League and Darron Gibson’s available for selection. Merry Christmas.

1 thought on “In The Bleak Midwinter”