The whole trainers thing has surely been done to death now, yet it doesn’t stop hundreds of bobble hat-clad, singing section types lining up outside Oi Polloi every 3 months to greet each dubious reissue of a so-called ‘classic’ pair of Adidas. Punters start queuing at 10pm the night before, get their picture snapped waving them above their heads for the MEN live blog and then rush home and stick them on eBay for £300 a pair. In truth, that was me to a certain extent a few years ago until I realised it was a) sad as fuck and b) at 40 I was too old to be wearing trainers.

I’d got to the stage where I was more bothered about owning certain trainers then actually wearing them… which is absolutely mental of course. That and the fact that Adidas became completely ubiquitous in the same way Stone Island did a few years previously. They became part of the uniform for clueless bellends who fancy themselves as football hooligans and who listen to Kasabian and Oasis. It’s not a good look. Nobody in their right mind wants to be wearing what fat lads from Doncaster wear, basically.

Anyway, I’m losing my thread here as this is supposed to be a book review. Golden Kicks – The Shoes That Changed Sport by Jason Coles (Bloomsbury, £16.99) is aimed squarely at the footwear fetishist demographic, and very nice it is too. It comes in hardback, coffee table format and contains lots of nice pictures and a couple of hundred words of historical perspective on all the designs featured. The stories behind each shoe are revealed via insights from both the people who made them and the athletes who wore them.

A nice book then, that would make a good Christmas present for any trainer obsessive in your life. Oh and please note the use of ‘trainers’, ie they aren’t ‘sneakers’ and they certainly aren’t ‘kicks’. 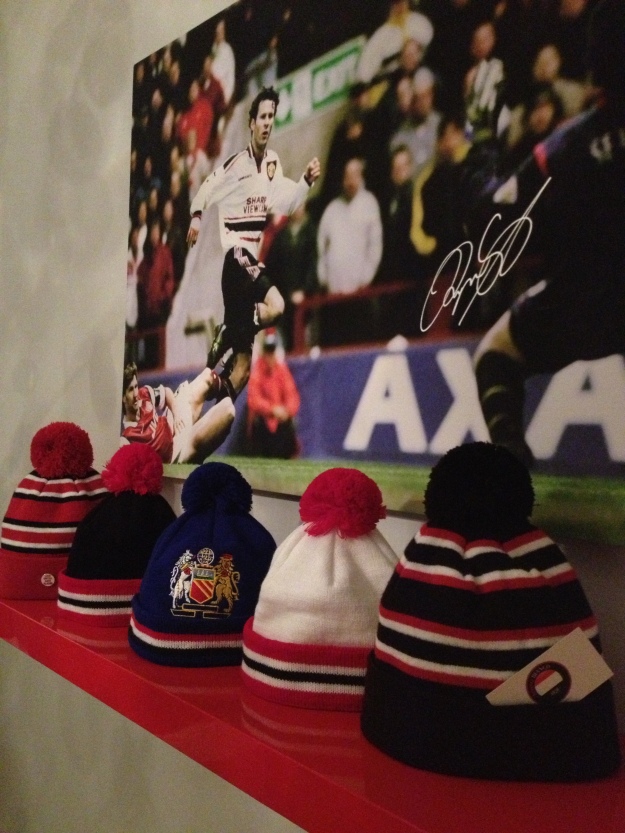 Last seen on the OT terraces sometime in the mid-80’s, the bobble hat has been on the comeback trail for a few years now. It remains the favoured headwear of Scandinavian-looking, beardy types whose natural habitat is Manchester’s Northern Quarter as well as casually minded football fans of a certain vintage. The arctic conditions of the last few months have given rise to significant sightings of bobbles at the match, the nattiest of which are the work of Nick Dydyna, one of the two brothers behind the recently formed Rosso Bianco Nero 1878. Red News sat down for a beer with Nick recently to discuss all things bobble-related.

RN: How did this all start?

RBN: We knew there was a market for quality, United related gear but it just never seems to be on offer. Then about 10 weeks ago we released our first 2 hats which sold steadily via our website. Barney from Red News put an advert in the fanzine, Red Issue followed suit and from there it just took off.

RN: I first became aware of you via Twitter…

RBN: Yeah, Twitter enabled us to spread the word about the product, though what really helped us was that a lot of respected lads quickly bought into the idea. My brother and I had thought about doing this for a long time but we’d never done anything about it, so we just decided to take a chance. It was a bit of a risk but we’ve now sold about 600 hats in 10 weeks…I think the extended winter helped too. We seem to have hit on a bit of a niche which we knew was there, but I couldn’t have predicted we’d do so well, so fast.

RN: The last couple of hats you’ve released have sold out in minutes…

RBN: Yeah, it’s been mad. I think we’re giving people a product with a bit of exclusivity that they know they are not gonna see everywhere. Going forward, that’s what we want to do but it’s hard because people go on our site and since we’ve sold out so fast, there’s nothing available to buy!

We’ve got loads of ideas for next season based on old programmes and old games, there’s plenty to go at. In the meantime we’re working on our first polo shirts and pin badges. For the pin badges we’re working with a designer we met on Twitter, his stuff is really smart…it’s nice to be working with other exclusive, little businesses. With everything we do, we’re trying to use local suppliers and manufacturers.

RN: What about the future?

RBN: First and foremost, we’re really passionate about United so that’s what we want to do despite having had interest from other clubs. That’s baffled me really, we’ve sold hats to Arsenal and Forest fans…the lads from Aberdeen have really got onto it as well as people from overseas.

We’ve thought about perhaps approaching small, independently owned shops maybe Oi Polloi or Ran, someone like that – on a personal level it would be a buzz to see our stuff in a shop one day. We’ve been sounded out by a couple of the stalls at OT to supply them but I think we’re offering something on a different quality level and appealing to a different kind of market. Essentially we’re just making stuff we like ourselves, if other people like it too then that’s great.