Whilst the esteemed editor of this organ donned his #5 cap to mix it up with the D-list shitterati at Rio Ferdinand’s book launch (see last month’s issue), I was handed the task of reporting back from Roy Keane’s gig at LCCC where he was appearing ‘in conversation’ with ghostwriter Roddy Doyle and Jim White of The Telegraph to promote his latest opus, The Second Half (Orion Publishing, £20).

The last one of these things I attended was Fergie’s appearance at The Lowry a year ago where he was publicising his recently released autobiography. This promised to be a similar setup – a free signed copy of the book was on offer alongside the possibility of picking up some interesting tidbits that hadn’t previously been made public. Unfortunately that night at the Lowry didn’t really deviate from the carefully managed script, as Fergie didn’t let his guard drop once under a very gentle grilling from the BBC’s Dan Walker. An evening with Roy Keane, I was pleased to discover, proved to be far more interesting and enlightening.

Shortly after the publicised start time of 7pm, there he was. Looking as trim as he did in his playing days, with no discernible middle-aged paunch and remarkably fresh faced since the terrifying beard he’d been sporting in recent months had been removed. Jim White then did the introductions, throwing in the somewhat outlandish claim that Keane and Doyle were the authors of “not only the finest football book, but the finest book you’ll read this year.”

White then proceeded to ask the first question, “what was your motive for writing the book?”, which in truth was his last meaningful input all evening as Keane needed little encouragement to talk….and talk and talk. He’s passionate, forthright and a great storyteller – one was left with the impression that Roddy Doyle’s task of transcribing Keane’s thoughts into written form was fairly straightforward one, given the fact he’s such a relaxed and candid interviewee.

The reason the book was so newsworthy, of course, was that it presented Keane with the opportunity to give a full and frank account of the events leading up to his departure from United. As anticipated, he doesn’t shy away from giving his version of the facts. There were disagreements with Carlos Queiroz along the way, but things came to a head with the infamous, never aired MUTV interview and the subsequent ‘airing of the grievances’ meeting with the entire first team squad and coaching staff in attendance. Keane (sort of) accepts that he played a part in his own downfall, his main beef is that “stuff said afterwards irritated me” and his belief that Ferguson and David Gill “should have done better by me.”

If Keane is bitter about anything, it’s about the way he was portrayed as a single-minded, loose cannon who needed reining in. If he was so unprofessional and unapproachable, he argues, how could he have survived at a club like United for over 12 years? “Yes, there were personality clashes like in any workplace, but it was no big deal.” It’s hard not to have sympathy with his reasoning here. United/Ferguson, after all, were the beneficiaries of Keane’s insane-level drive and will-to-win for many years. Put it this way: I very much doubt he’d have seen his contract terminated if the post-Boro blow-up had happened a few years earlier when he was in his prime as a player, and not the battle scarred veteran he’d become by 2005.

In spite of the acrimonious ending to his United career, Keane spoke very fondly about his time at the club and still has a lot of respect for Ferguson, describing him as a “great manager”. He clearly has a lot of time for his former teammates, “top quality players”, sharing a dressing room ethos where “there was no messing about… we wanted to win the match and to train properly”. Understated, perhaps… but from the mouth of Roy Keane, this is high praise indeed. 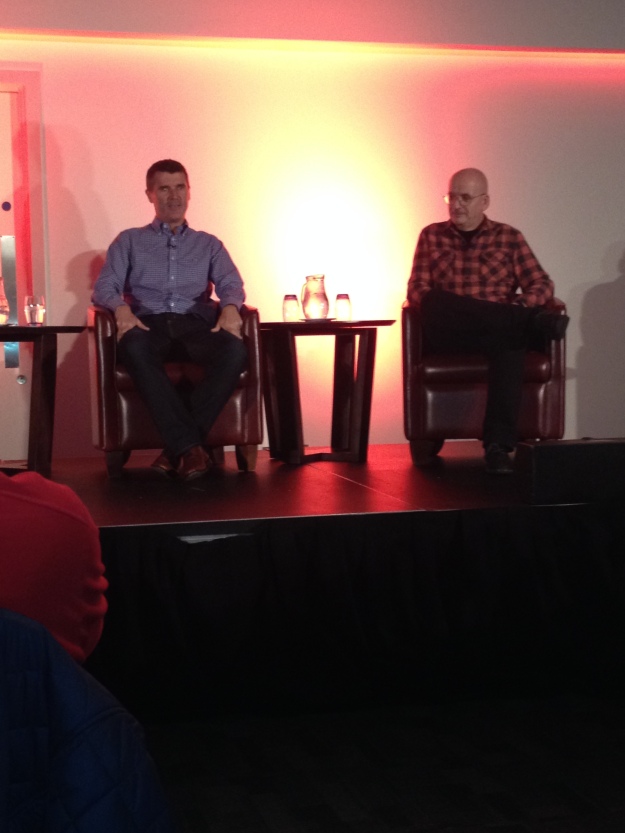 Keane conceded that he made numerous mistakes during his time at the club, admitting when he first arrived in Manchester he was anything but the über-serious professional he was renowned as later in his career. He recalled a big fall out with Brian Kidd in the days between winning the league at Middlesborough and the ’96 Cup Final, partaking in a week-long bender which resulted in him reporting for training each morning still suffering the effects of the night before. Then, after being named MOTM on the Saturday, greeting a disbelieving Kiddo at the bar during the post match celebrations whilst getting stuck into the Bacardi.

There are regrets too, particularly some of the things he said in the heat of the moment. “Maybe this team needs to be broken up” post-Bayern in 2001 was, on reflection, a misguided attempt to elicit a response from the team following another disappointing defeat. The ‘prawn sandwich’ comment too, a dig against United fans that was manna from heaven for the ABU nation was merely him sounding off, “looking for an angle, to get a response off people… trying to get Old Trafford rocking.”

After an hour of listening to Keane, and a few minutes worth of Roddy Doyle who described his reasons for getting involved and the process of writing the book, the microphone was then passed to the floor as the audience were invited to ask questions. This led to another hour of recollections as Keane (now fully warmed up) answered everything thrown at him with complete candour and a total disregard for the fact there were a few hundred people present.

Some of his comments led to a couple of news stories later in the week after details reached journalists’ hands, but in truth nothing was said that was particularly inflammatory when taken in context. There were a slight digs at Bryan Robson and Paddy Crerand, as Keane made the point that club employees don’t make the most unbiased of pundits – he jokingly described the MUTV ex-players cabal as “like the Mafia or something.”

Another question led to a telling insight to how United approached games under Ferguson, or more to the point, how we didn’t approach them. “We wouldn’t be analysing teams too much. That was one of our strengths… we kept it unbelievably simple.” He only recalled Fergie getting senior players together for a pre-match meeting on a handful of occasions. Once, when the subject of dealing with the specific threat of Steve McManaman arose, Keane’s surprise and confusion about even being asked for his input was priceless, “umm… we’ll deal with him… he’s not Pele!”

All in all it was a great night. Keane was on top form and anything but the scowling, embittered figure he’s often portrayed as in the media. The book itself? Even if it’s not, as Jim White claims, the finest thing you’ll read this year, it’s still worth a couple of hours of your time ploughing through it. The motivation behind doing it, he explained, was simply “giving my opinion”, rather than “slagging everybody off” as has been claimed.

That’s essentially the crux of Roy Keane – it’s what made him a great leader on the pitch, and latterly, great value as a studio pundit. If someone asks him a question, he will answer it. Truthfully. Football is full of anodyne, media trained monkeys trotting out bland platitudes which you just know don’t truly reflect their private thoughts. Keane is different in that he actually says what he thinks. There’s no agenda there, everything he says is packed with truthiness. You don’t agree with him? That’s no problem, you’re entitled to your opinion too.