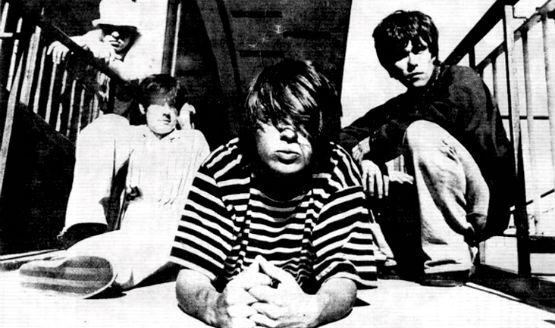 Forget the Jubilee, the Euros and the Olympics – the real story of this dismal summer has undoubtedly been the return of The Stone Roses. Just prior to the Heaton Park homecoming gigs arrived what looked like being the first potential Roses cash-in, a new book claiming to offer the ‘definitive story’ of the band based on 70 new interviews and promising 40 unseen photographs.

The Stone Roses – War and Peace by Simon Spence (Viking, £20) is anything but a rush-released piece of opportunism, I’m pleased to report. Spence’s previous books were Stoned and 2Stoned – the acclaimed memoirs of reclusive, former Stone’s impresario Andrew Loog Oldham and he boasts an impressive CV which includes work for the NME, i-D, Dazed & Confused and The Face – he penned the Spike Island feature on the band in the Kate Moss fronted, 3rd Summer of Love issue back in 1990.

The book was originally conceived in 2008 and took two years to research and write. It falls just short of the promised ‘definitive’ take due to the four band members bailing as the project reached its conclusion – but it’s as close as anyone is likely to get currently.  Accounts from both key and peripheral characters from all stages of their career are included – quite marvellously, the author even seeking out Toxin Toy, the support band from their 1985 Swedish tour (the Roses’ ‘Beatles in Hamburg’ period) for their recollections and memories.

I’ve read pretty much everything it’s possible to read on this band since first seeing them days after my 16th birthday in the summer of ’89, and whilst there’re no earth shattering revelations for time-served devotees  – there’s plenty of juicy morsels served up for anyone seeking fresh detail and new perspective. Recommended.

As anyone who knows me well can testify, one of my favourite rants in the whole wide world is bemoaning the hopeless state of radio (specifically, music radio) in this country. 6 music aside, it tends to be awful. Local radio is even worse. Yes, there are decent shows on at odd times on various stations but (to these ears) there’s nothing in existence that you can switch on with the assurance you’re going to be entertained, amused and god forbid hear stuff that makes you think ‘Yes!’

I’m sure that the people in charge of running the likes of Key 103 or Galaxy or Smooth FM don’t set out to offend the casual listener, it’s just that in practice they do.  You know what I’m talking about: generic, formulaic mush served up by hospital radio-schooled morons churned out depressing hour after depressing hour. ‘Coming up we’ve got the new one from Cheryl Cole and after that you can text in to win a new kitchen…’

What makes the current state of play so depressing is that between 2005 and 2008, a tin pot little radio station broadcasting from the top of a hill in Oldham did something very different – they installed Clint Boon as head of music and he lay the foundations for something that quickly reigned supreme over the airwaves of Greater Manchester for 3 years. If you can excuse what may appear something of an outlandish claim – for an all too brief period, The Revolution 96.2 became the best local radio station in the world.

What made ‘The Rev’ unique was the music and the people playing it. Here was a place where at any point in the day you could hear stuff as diverse as Sufjan Stevens, Glen Campbell, The Pixies, Curtis Mayfield, Teenage Fanclub, Pharoahe Monch, The 13th Floor Elevators…it simply played an endless stream of great music. Playlists acknowledged Manchester’s musical heritage (The Smiths, New Order, James etc) but not in a hackneyed, ‘all our yesterdays’ sense – as much airtime was dedicated to breaking new, local acts with the likes of Cherry Ghost, Jim Noir and Twisted Wheel receiving great backing and heavy rotation.

Clint Boon jumped ship after a year or so to join the newly launched XFM, leaving Manchester club circuit veteran Phil Beckett at the reigns. By then there was a tremendous line-up of regular DJs in place. Mani and Mike Joyce hosted weekly shows, ex-Mock Turtle (and brother of Steve) Martin Coogan looked after the dayshift with Nev Cottee (ex-Proud Mary and South Nightclub DJ) covering the early evening slot. Former Paris Angel Scott Carey hosted the fantastic midweek ‘Transmission’ and soap actor bods Graeme Hawley and Jeff Hordley (better known as Corrie’s John Stape and Emmerdale’s Cain Dingle) chipped in on a Sunday afternoon. Add in a few specialist late night shows and you get the idea of what was on offer.

Via word of mouth, the station quickly developed a strong, cult following throughout the North-West. Being positioned in up in t’hills proved to be advantageous – the transmitting mast structured to serve Oldham, Rochdale and Tameside beamed out a decent signal throughout Greater Manchester and beyond. Although XFM (playing Snow Patrol, Stereophonics and Razorlight ad-nauseum) had come along in a blaze of publicity with a huge advertising budget, The Rev offered more diversity and became the infinitely cooler alternative. I had every radio in the house tuned to 96.2 and the CD player in the car was made redundant.

Aside from the quality tuneage on offer, what stood out was the people involved and their reasons for doing it – the station was clearly being run on a shoestring so the only motivation of those involved was to make the best of what they had by filling every hour on air with fantastic music. Like falling in love with your ideal woman, it was so good that there always something of a nagging suspicion or sense of foreboding that ‘this isn’t gonna last…something will happen to fuck this all up’. And something did. Quite spectacularly.

It had been coming for a while in truth. Despite the best efforts of management and presenters, the all-important RAJAR figures (produced quarterly to reveal listenership figures and of paramount importance to potential advertisers) made for miserable reading. This measure only counted listeners within the official target area of the station itself, the fact that in reality they were broadcasting to an audience of thousands beyond the Oldham district proved of no consequence whatsoever.

What happened next was both grimly depressing and at times, tragically comic – management panicked and imposed a new music policy and daytime playlist with immediate effect, alienating both presenters and audience alike. Where there had once been Big Star, now there was Will Young. Stereolab? Forget it, try Elton John with ‘I’m Still Standing’…“and no, I’m not being ironic” intoned a demoralised-sounding Martin Coogan.

It was all over within days. Barring a couple of exceptions the entire team of DJs walked, and insult was then added to injury via an announcement that the station had been sold to a consortium fronted by Steve Penk, the ex-Piccadilly/Key 103 breakfast goon and presenter of countless, godawful TV shows. The self-appointed king of lame-assed radio banter and ‘hilarious’ prank calls had come back to save the day. The Revolution returned to Bland FM territory, playing mogadon-tinged MOR non-music just like every other local radio station in the world. Celine Dion and Maria Carey, anyone?

Facebook and internet messageboard campaigns were launched as dismayed former listeners voiced their collective disgust at the hi-jacking of their favourite station. The former presenters banded together under a newly adopted ‘Radio Republic’ moniker and via a myspace page, announced that moves were underway to re-launch online in the near future…but then all went quiet. It appeared that ‘The Rev’ as it was once known and loved had been consigned to history.

Then last month, as another quartet of much missed Mancs plotted up in a Soho hotel, announcing their long-awaited comeback to the assembled world’s press – there were rumblings on Twitter that 3 years on from Penk’s smash and grab raid, Radio Republic were about to stage their own resurrection.

The newly constructed www.radiorepublic.net confirmed the news to be true, and the station went live on the 11.11.11 at 11.11am. Early shows have been absolutely brilliant, and I can heartily recommend you get on this immediately and give these good people your support.

What’s in place now isn’t a radio station in the traditional sense, the music being consistently good and the presenters not being insufferable dickheads makes it different for a start. Shows are pre-recorded and uploaded daily onto the site, where they can then be accessed simply by clicking on the links provided. Webcasting it’s called – no software required, no need to register and simple to suss out even for the computer illiterate.