So here we are again. August rolls round and it’s time for another 9 months of money, gossip, lies, tantrums, tabloid exclusives and halfwitted millionaires…yes comrades, the football IS BACK!!

Once upon a time I’d spend the summer months counting down the days until the start of the season. The fixtures being published was a big deal, as was transfer market activity, a new kit being released, pre-season friendlies…this season it seems to have arrived too quickly. A couple of months off without the expense, the stress, feeling compelled to watch SSN, not having to engage in mindless bantoh with fans of other clubs…it’s been great and as things stand, I’m sorry it has to end. But it does. I know I can’t spend the entire winter watching beach volleyball on telly, despite such a prospect holding more appeal than seeing Michael Carrick start the season at centre back.

Given what happened on that final day in May, most people I know of a red persuasion have spent the last couple of months suffering with varying degrees of post-traumatic stress disorder. As the day arrived, only the most foolhardy seriously expected results to go in our favour…but the manner in which everything unfurled, Jesus Christ it was brutal. One thing I can confidently predict about this season, no matter what lies ahead, it won’t be as anything like as painful as the closing moments of the last. Just horrific.

With City winning the league and Chelsea fluking their way to a scouse-like, scabby European Cup win, the scene was surely set for England to win the European Championships. Mercifully we were spared such a sight and true to form, the national team saw fit to deliver exactly what anyone with a modicum of sense expected of them…absolutely fuck all. Completely out of their depth and as inept on the big stage as always, it was a relief when they went out. Watching the quarter final vs Italy was a tortuous experience, one felt relieved for the rest of Europe that defeat on penalties meant viewers were spared a repeat performance in the semis.

The tournament as a whole proved similarly underwhelming and there was an air of inevitability about proceedings throughout the entire fortnight. England struggled the reach the quarters, the Germans were better than the sum of their individual parts and Spain won by virtue of being able to pass the ball better than anyone else. Once upon a time these tournaments were something to look forward to, packed with action and incident that made for genuinely gripping viewing. Euro 2012 only confirmed suspicions that international football has been eclipsed as football’s biggest spectacle – it delivered none of the madness and drama the latter stages of the Premier and Champions Leagues’ had provided only a few weeks previously.

It was left to the Olympics to provide the sporting spectacle of the summer and fair play to the cockneys, even an embittered Northern curmudgeon like myself has to admit they did alright. I tuned into the opening ceremony in full-on, ready to take the piss mode but was surprised to witness something which was at times touching, heartfelt, funny and most extraordinarily, actually very entertaining. Even that sour faced old bag herself, the Queen made me smile for the first time I can ever remember. 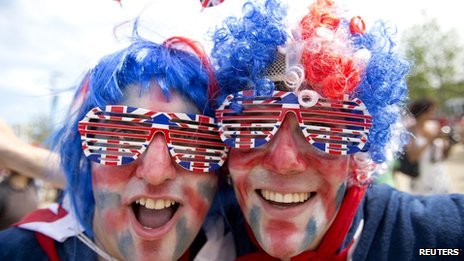 For something that basically amounts to a overlong minority sports day, the Olympics did make for enthralling viewing at times. Aside from our achievements in the velodrome or on the running track, many of the other events continue to baffle. The BBC’s coverage was so focused on Team GB, they virtually suspended all other news coverage for the duration to report on our progress in the ‘twatting around in little boats’ and ‘making a horse dance’ disciplines.

Thankfully, the overlong closing ceremony (like watching a re-run of the 1993 Brit Awards on a cocktail of industrial strength acid and ketamine) saw us quickly regain a taste for healthy cynicism to replace the happy and glorious, victory vibes we’d been gorging on throughout the preceding fortnight.

The moment the tournament finished, sports hacks were tasked with dealing with the imminent transition back to Premier League concerns. A handful, namely Rob Beasley in The Sun, predictably opted to run with the ‘aren’t footballers absolute bastards in comparison to our brave Olympic heroes’ line. Such stories have appeared after any non-football, sporting success in recent times, namely the rugby world cup win or ashes victories – the general inference being that football is a game played and watched by utter shitheads.

Of course, football is fucked up – this isn’t a new revelation. It’s easy to take a snapshot of the game in 2012 (mercenary players, financial doping, the greedy opportunism of owners etc, etc) and reach the conclusion that the sport now exists at gutter level. The Olympics has the advantage of occurring once every 4 years, for the rest of the time the majority of its events are marginalised, with participants out of sight and out of mind.

If football happened once every 4 years, then I’d expect our players would be held in similar regards to ‘heroes’ such as Ben Ainslie and Chris Hoy. If that pair lived in the Premier League goldfish bowl, the public would soon be treated to a different spin on their backgrounds, personalities, families and the lives they choose to lead. Football is tainted by money and greed and the likes of Terry, Tevez, Rooney….whoever…are clearly a product of this environment. I fail to see how they are to blame for its existence though.

Still smarting from the Sneijderless summer of 2011, I was determined to give transfer speculation the swerve this time around, having now resigned myself to the fact that we are never going to sign a midfield player ever again. Going off the players brought in, I’ve come to the conclusion that Fergie has looked at Barca’s revolutionary, strikerless formation and is set to present our own version, ‘the doughnut’ – ie ‘nothing in the middle’. Presumably, any midfielder still under contract will be allocated a new position (centre back, right back, winger or striker) using the tombola that was successfully trialled during the league cup run of last season.

The Van Persie capture, despite not being the player most of us hoped United would splurge millions on this summer, has at least provided a pre-season fillip that’s been missing since the purchase of that other ‘final piece’, Berbatov back in 2008. Like Veron before him, Berbs is now ducking out of the exit door – putting an end to an at times dazzling but overall, hugely underwhelming United career. Let’s hope Van Persie avoids injury (and Fergie’s tombola) and instead enjoys a Sheringham-esque career upsurge on the OT stage. Anyway, before we judge too harshly the profligate purchase of a 29 year old crock, it’s perhaps worth remembering Liverpool spunked £11M more on Andy Carroll. Bargain.

1 thought on “Heroes and Villains”