My first ever meeting with a real life footballer was a cringe inducing, sobering experience which taught me a valuable lesson: never speak to them. I was 14 years old and playing pool in Menorca when I was shocked to discover a familiarish face on an adjacent table. It was that bald bloke who used to play for Southampton. Without a second thought I approached him and politely enquired “Excuse me mate, are you David Armstrong?” “Yes”, he replied. And that was that.

Footballers are strange looking creatures in the flesh. We see them regularly at the match, they’re on the telly constantly and appear plastered across huge billboards advertising whatever stuff they’re paid to advertise. It all builds up a sense of familiarity that is only dispelled when meeting them in real life.

I realised this for the first time after stumbling across Robbie Savage whilst doing the weekly shop a while back. What a weird looking bugger that lad is, the narrowest shoulders and the thinnest arms I’ve ever seen on a man. Now I consider myself a natural athlete and have never felt it necessary to spend even 10 minutes in a gym…but he made my underwhelming frame look like Tarzan in comparison.

A few years ago I bumped into Ole Solskjaer before a gig at the Apollo and was taken aback by how different he looked from how I ‘knew’ him previously. Despite standing 5’10” tall according to Wikipedia, he seemed much smaller…and at risk of sounding all homoerotic about it, his walk alone was enough to set him apart from us mere mortals. No swagger as such, just all lithe and sinewy – he struck me as the sort of bloke who’d make a magnificent diamond thief.

The Premier League today is full of ‘talents’ you could describe as athletes first, footballers second. I’m thinking of players like Glen Johnson or Micah Richards here, limited skills but incredibly well developed athletes who’ve been coached and trained to within an inch of their lives – they have the ability to run up and down for 90 minutes, make bone crunching challenges then do something half decent with the actual ball when the opportunity presents itself. Essentially though, with different guidance and choices – these lads could just as easily be making a living lugging bricks about or playing rugby league.

Wayne Rooney was once hailed as the antidote to players of this ilk filling up Premier League team sheets. Rooney, we were informed, was a resolutely English, Alf Tupperesque throwback to the heroes of yesteryear…an instinctive street footballer raised on egg and chips as opposed to multivitamins and protein shakes. A breath of fresh air and a talent to cherish in a modern game laden with maladroit, muscled freaks. This was the consensus of opinion regarding Rooney the prodigious teenager, however – it can’t really be applied the 26 year old, 2012 version who should by now be approaching his prime. 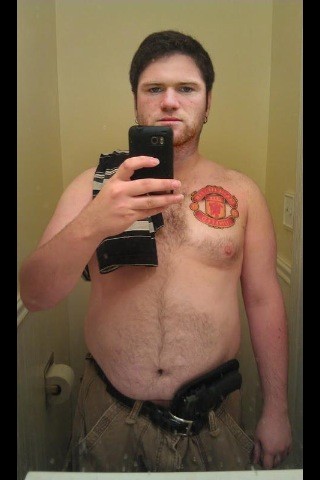 Rooney’s annus horribilis the season before last and subsequent patchy form last season, (only masked by an exemplary goal return) have led to renewed speculation about his attitude and fitness. Ferguson’s comments (“Wayne is a boy that needs games, you can see that from the frame he’s got”) were innocent enough, but could be interpreted as a timely indication of his private feelings on the matter. Perhaps most tellingly of all, there was no apoplectic Fergie response when his quotes were run by the Mail alongside old pictures of Rooney emerging from the sea whilst on holiday with his similarly ‘big boned’ parents. One is left with the distinct impression that relations between the manager and his star man could be described as ‘strained’ at best.

So Rooney has been left to (ahem) digest all this and in the light of Van Persie’s arrival, faces a potential battle for his place in the team upon regaining form and fitness. Anderson meanwhile, another player with long suspected re-fuelling issues, appears to have abandoned all pretence of being taken seriously and judging by the recent pics posted on his Instagram account, is now experimenting with self-parody.

One might naively expect a player lacking stamina and consistency who’s no longer considered for his national side, to spend the 2 week break putting in some serious shifts at Carrington – possibly attempting to get in peak condition for the season’s resumption. Not Ando, no. Instead he’s having it large in Dubai posting pictures of his dinner on the internet and sporting a shiteating grin that positively screams ‘I don’t give a fuck’. I’ve long lost hope of this clown ever kicking on and fulfilling the promise he held as a teenager – I’ve given up, he’s beaten me and fair play to him. You’ve got to admire the chutzpah of the lad really, despite not being an A grade footballer he’s proven himself to be an international class wind-up merchant.

A player who could never be accused of carrying excess weight is our bequiffed Spaniel in net. Dave De Gea turned in a MOTM performance at Goodison and then (in conjunction with Vidic) followed this up with a spectacular gaffe in the Fulham game. No biggie though, one would have thought, it’s exactly the sort of thing that happens once or twice a season to every keeper. Not according to Ferguson however, who then proceeds to drop him for the Southampton game, happily telling reporters it was all due to the Fulham error and he’d be back in a couple of weeks.

I can’t have been alone in thinking ‘what the fuck?’ at this decision. Last term we only saw the best of De Gea after Lindegaard’s injury had made the keeper selection a no brainer. Constantly switching did nothing to help defensive stability during the early part of the season and only served to highlight his perceived weakness in dealing with crosses – to the extent teams began to target him purposefully. As the season progressed and De Gea’s form and confidence improved, it ceased to be an issue – yet here we are back at square one with the ‘vulnerable young Spaniard’ back in the spotlight. He’s young and he’ll make mistakes, which pretty much everyone accepts…so I fail to see how holding him back and trying to shield him from journeymen cloggers like Rickie Lambert is going to aid his progress.

Due to the Editor’s say-so (those pesky print deadlines again), this article was submitted prior to last weeks game at Anfield. So I’ll conclude by passing on my sincere hopes that the team decided to turn up for the game for the first time in a decade or so and that no reds in attendance felt moved to join in with the fuckwitted #mufcfamily’s call for us to join in with massed, communal singing of ‘You’ll Never Walk Alone’ in support of the Hillsborough Justice Campaign. We should respect the scousers for their ongoing fight but never lose sight of the fact that in football terms, they remain the enemy.