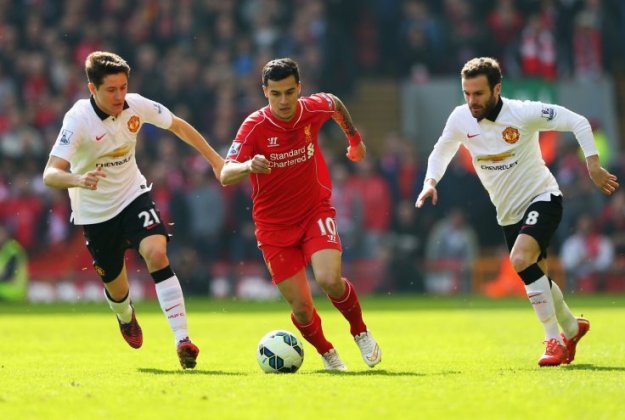 Well who would have thunked that then, eh? The blinding first half hour of the Spurs game, when United emerged with their most memorable passage of play in I dunno how long, followed by an equally impressive opening salvo against Liverpool. Same team, same formation, same level of performance. It’s probably 15 years or more since we went to Anfield and controlled the game, but we actually did it. Turned up, dominated possession, created chances, took a couple and won the match. At one point during that 2nd half, when we were 2-0 up and the sun was shining, I’m sure I was actually, ever so briefly, enjoying myself. It soon evaporated when Sturridge scored and we faced a nervy last 20 minutes, but that’s not the point. For a few precious moments, I had the distinct feeling that United were back.

It’s taken until March for Van Gaal to stumble on his preferred line up and it’s one that even the sagiest of sages couldn’t have predicted back in August – Falcao and Di Maria on the bench with Young and Fellaini full of confidence and justifying their continued selection. Personally speaking, I gave up on the pair of them months ago and was somewhat aghast at the fact Van Gaal was still persevering. Fair’s fair though – they’re worth their place at present. Fellaini is still one of the most ungainly players I’ve ever seen – a professional nuisance who looks alright apart from when he has to use his feet. As we saw when he was at Everton, though – when he’s on form and firing he can be unplayable. The footballing aesthete in me still finds him grossly offensive, but there’s no denying that he’s brutally effective at what he does best.

To counter the presence of Fellaini and Phil Jones (another who seems to spend much of his time on the pitch playing a different sport to everyone else), Van Gaal has finally seen fit to unleash Mata and Herrera in tandem and thus bring about this unexpected outbreak of shekshy football. Juan Mata is ace. He’s just bloody lovely isn’t he? He writes a blog every week in which he signs off with hugs, he explores the Peak District on his days off, he tweets monochrome pictures of Manchester’s architecture and he probably likes kittens too. I mean, if you were, you definitely would, wouldn’t you?

Herrera too is the sort of lad who’s more likely to be found wandering round the Whitworth rather than sparring with Phil Bardsley after too many Smirnoff Ices. Like Mata, he looks a smashing player who’s too often been overlooked this season despite impressing when called upon. Since Van Gaal maintains that players are picked on merit, then surely the last two games have shown that the pair deserve to stay in the side for the remainder of the season? Give them a run, see if the team continues to thrive… and if Fellaini’s elbows are required as a counterweight to their lightweight presence, then so be it. I can live with that – at least we’ve got midfielders playing in midfield now.

The victory at Anfield was topped off, of course, with a wonderful cameo by Steven Gerrard who managed less time on the pitch than he did giving his leaden-faced, post-match apology… in which he apologised to pretty much everyone in existence barring the bloke he actually stamped on. The anguish in Martin Tyler’s voice as Martin Atkinson produced the red card was fantastic. Having spent the proceeding 2 minutes furiously spouting every last cliche he could muster, Tyler could barely conceal his disappointment as his planned narrative for the remainder of the match vanished within 40 seconds of Slippy’s grand entrance.

There’s no doubting that Gerrard has been a great servant for Liverpool over the years, but as a truly great player he falls somewhat short of the top tier. His career has coincided with both the era of the overhyped Premier League superstar and Liverpool’s decline from the game’s elite, so consequently he’s been lionised and feted by a generation of fans and ex-players desperate to see a return to their glory years. The Gerrard myth was finally exposed for all to see during last summer’s World Cup, when Hodgson made the glaring error of going with public opinion and making the bloke his captain and thus undroppable.

Contrary to Sky Sports’ legend, Gerrard is anything but a selfless leader of men who continues to inspire everyone around him just by frowning and looking serious. It’s a myth. Instead, I’d suggest that Steven Gerrard plays mainly for himself, and has done for years. He’s got a big heart, yes… but that’s part of the problem – all too often he’s relied on that rather than demonstrate a functioning football brain. The reality is that Gerrard is tactically ill-disciplined and fatally flawed as a genuine top-level player. Talented undoubtedly, but as far as Liverpool and England were concerned, too often a liability when the stakes were high and a cool head was required.

Talking of frowning and looking serious, Ryan Giggs has been doing an awful lot of that this last few months. Now I’m no expert on body language, but judging by Giggsy’s current demeanour, life as a key member of Louis Van Gaal’s backroom staff looks to be about as much fun as attending a child’s funeral. You dutifully sit there listening to the big feller muttering to himself, you watch as he makes notes on his big pad, you offer the odd opinion (which he probably ignores) and then when the clowns on the pitch somehow contrive to score a goal, you get rewarded with a slap across the chops for your troubles.

Now I’m not trying to shit-stir and this is based on nothing more than me speculating, but one is left wondering how long this current set-up is going to last. Despite Ryan never being the most expressive of personalities off the pitch (which I can personally attest to having been resoundingly blanked after letting on to him in the bogs at Cheerleaders in the mid-90s… not that I’m still bitter or anything), he just looks utterly fed up at the moment. Maybe it’s the comedown after playing for 20 years, maybe he was short of a better offer after not getting the manager gig himself, maybe it’s nothing of the sort… but something doesn’t look right.

Whatever Giggs is thinking right now, his current job is surely still preferable to debating bed linen and shower fittings with Phillip Neville. Yes, the imaginatively named ‘Hotel Football‘ is now open for business and regardless of the fact you or I are unlikely to ever pay it a visit, it’s clearly going to make a shitload of money for the already minted class of ’92 proprietors. The incredible thing about this venture is that it actually exists. I mean, how on earth did they manage to get away with it? United employ departments full of staff tasked with exploiting the commercial potential of everything in the world yet they somehow miss the fact that a strip of land is ripe for development less than a minutes walk away. It’s absolutely absurd.

Every day as Arnold and Woodward drive to and from work, there it is just standing there…. reminding them, taunting them… it must be eating them up seeing all that money being poured into someone else’s pockets right on their doorstep. Next time Joel and Avi turn up you can bet they’ll be ushered in via Stretford Bridge so they don’t see it. Oh to be a fly on the wall at the next scheduled board meeting, “I don’t care about the fact you two idiots have found an official toothpaste partner in Zimbabwe, what the holy fuck is that thing doing over there?!”

1 thought on “And Suddenly”