Oh well. Just as things were progressing quite nicely, a relatively simple-looking triple header against Hull has seen United return to their toothless, autumnal travails. The points salvaged against Liverpool and Stoke were tolerable in the grand scheme of things, but the Hull fixtures saw United start poorly and then get progressively worse over 270 entertainment-starved minutes. How frustrating that the rock bottom, relegation certainties visibly grew in confidence over the course of the 3 games, rather than suffering successive, routine drubbings as one might have hoped.

The away game was one of those nights where you really do question, ‘why do I still bother doing this?’ Okay, so the United end was bouncing and we reached another cup final… but the rest of it? You leave work early and drive to East Yorkshire in January, it’s about -5 degrees, you go in a pub where the locals are shitfaced at 6pm on a school night and there’s a football card going round where the prize is a ‘£10 meat voucher.’ Firstly, what exactly is a meat voucher? Secondly, who were the sick, twisted individuals on the panel who voted this hellhole ‘UK City of Culture 2017‘?

The league game at OT was a similarly grim spectacle. In a week where the top four sides each dropped points, United had the opportunity to gain some ground yet completely failed to take advantage. The team seemed to suffer collective amnesia during the 2nd half and started racking up the Van Gaal-style sideways passes rather than pressing relentlessly for a winner. Most disconcerting, given how we’d absolutely battered Stoke for an hour before getting a richly deserved injury time equaliser.

Hopefully this last couple of weeks is just a blip and we can bounce back at Leicester on Sunday. It still feels like we’ve made huge progress over the last couple of months, so it’ll be disastrous if this ill-timed dip in form becomes another slide. Worryingly though, the team looked knackered during the 2nd half against Hull… which doesn’t bode well at all given that the Europa League, Thursday-Sunday cycle of games is about to resume. Honestly? I’d be content to get knocked out asap if it helped secure a top four finish and a return to the Champions League next season. 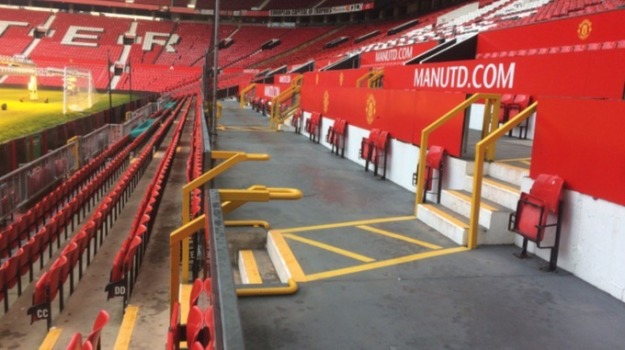 It’s pointless even discussing the state of the atmosphere at OT as it’s just routinely appalling. No debate, it just is… those days are gone. The last singing section venture did nothing whatsoever to improve things overall. All it did was provide a section of the ground where people wearing retro Adidas tracksuit tops and bobble hats could stand up and clap like demented seals whilst singing about Eric Cantona for about 2 minutes every game. No doubt that those involved like to think they’ve made a difference but in reality, the opposite is true. All they did was help displace a couple of thousand time-served J-Standers and snuff out an area of the ground that would still stir itself and make some noise when the occasion demanded it.

It was disappointing then, to learn that neighbouring East Lower and K-Stand reds are being forcibly moved in order to make way for the extended disabled section that’s been announced. Obviously it’s a very good thing that the club are taking positive steps to increase the capacity for disabled fans, that isn’t the issue here. The problem is why this needs to be at the expense of a sizeable proportion of the cheapest tickets available at Old Trafford?

A season ticket in East Lower currently costs £532, decent value in terms of the cost of watching Premier League football these days. It isn’t the greatest view in the ground as you’d expect at that price level, so for the most part the people purchasing those seats do so because they are affordable. If those affected accept the club’s offer to move to seats elsewhere, at the very least they can expect to pay a further £170 on top of that. Quite simply, this development will price many hundreds of fans out of going to the game.

Whilst the club’s email to affected ST Holders trilled about “state-of-the-art reversible platforms”, “accessibility lounges” and “300 new positions for disabled supporters”, all very commendable – the upshot of this is 2000+ supporters having a price increase imposed on them that will ultimately negate the cost of financing the development. Additional disabled spaces, let’s not forget, the club are obliged to provide otherwise they’d likely face legal action from the Equality and Human Rights Commission (EHRC).

Far from being a good news story then, or an example of the club doing something positive for a minority of supporters, this is just another example of Glazernomics in practice. Top of the Deloitte money table, £513.3M revenue recorded for 2016, £540M predicted for 2017, yet where is the announcement of increasing the ground capacity by redeveloping the South Stand? How about investing a few hundred million by building something truly world class that could incorporate many hundreds of disabled spaces as well as taking the capacity over 90,000? Yeah right – don’t hold your breath.