Firstly, I’d better explain that this was written in the aftermath of Barcelona at home, so in case there was a repeat of the le miracle de Paris during the return leg, I’ll apologise now for not being psychic. As it is, I’m left to comment on what transpired at OT the other night and as you can probably guess, I wasn’t exactly blown away by the performance served up.

The night started with my old man accusing me of being ‘miserable’ because I expressly stated during our journey to the ground that I wasn’t particularly enthused by the prospect of seeing Messi again. My Dad loves football. As well as supporting United for 50+ years he’s got a genuine affinity with Celtic and Barca too. Whereas me on the other hand, I actively dislike any football team that isn’t Manchester United.

Why would I feel excited about seeing Messi again when I’ve already seen him play a handful of times including 2 x European Cup finals when he’s made us look like rank amateurs? I know he’s an all-time great who’s racked up 900+ career goals against Osasuna and Levante, but I would honestly rather he were out injured as I’m completely sick of the sight of him in a ‘versus MUFC’ context.

In the days preceding the game there were numerous clips floating about of the meeting with Barcelona back in 1984, when the 58,000 packed inside Old Trafford witnessed one of the greatest nights in the club’s history. As well as marvelling at the fact this game took place a full 35 years ago, I was left pondering the extent to which genuine big European nights have changed during that period.

We all know the atmosphere is routinely crap these days, but previously I consoled myself that OT could still rouse itself when the occasion demanded it. Sadly, Wednesday night confirmed the fact we just can’t do it anymore – regardless of who the opposition is. I know our current team isn’t the greatest but this was still a European Cup QF at home to Barcelona and the ground should have been rocking. 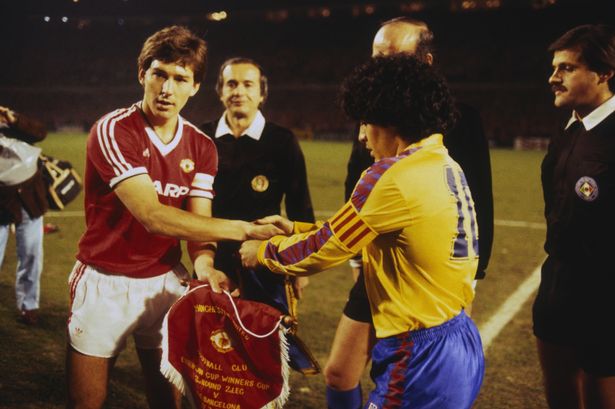 Being totally honest now, the atmosphere was pretty dire. I’m not comparing it to that night back in ‘84 alone as that would be a ridiculously unfair comparison. We’ve had so many memorable days and nights during those intervening years, but I’m struggling to recall the last time the ground crackled with excitement and the noise generated meant your ears were still ringing the next day. Sadly, such occasions have gone for good now, they really have. We were privileged to have been around when Old Trafford was something special.

Watching the opposition dominate possession has become routine over the last few years. After taking an early lead, unlike PSG or Juventus, Barca didn’t attempt to rub our noses in it and instead seemed content with stopping us scoring. Not too onerous a task when considering we’d managed just a solitary goal in the 4 previous Champions League home games this season. Watching Barca keep the ball with zero fuss and routine efficiency demonstrated just how far United are from their level. Half of our players are utterly terrified of the ball and we were incapable of stringing 3 passes together for much of the evening.

Pogba, once again, was absolutely appalling and failed to make any impression whatsoever. Despite Solskjaer’s hopes of keeping this prize bellend onside and building a team around him, it would make far more sense to take whatever money is offered for him this summer. Unfortunately, my guess is that there’ll be no firm enquiries from either Madrid or Barca because neither are daft enough to spend £100M+ on a very average midfielder who delivers so little so consistently. If you think I’m being overly harsh then more fool you. Phil Neville was a more consistent big-game, midfield performer than this clown.

‘His excellency’ was merely anonymous, however. The most inept performance award yet again went to Ashley Young, who’s fast using up any goodwill he’s earned with his wholehearted yet typically underwhelming stint at fullback over the last few years. I’m so bored of watching Young toil away, squandering possession week after week after week. He’s now reached that same stage in his career where Gary Neville realised his time was up and promptly retired with credibility still intact. The penny hasn’t dropped with either Young or the United hierarchy, unfortunately. Christ knows why he’s been given a new contract because it’s only going to get even more embarrassing for all concerned from this point.

After 4 defeats in the last 5 games, the one positive bit of news this week was that Ander Herrera could be leaving at the end of the season. We might have worse players on the books but if the club don’t cave and reward a 29 year old with a 4 year, 200K per week deal then that’s a step in the right direction as far as I’m concerned. He’s nothing special and he never has been. Shipping him out as well as a few more of the 6/10 crew would make for a very positive summer’s business.

Still, all the usual gripes aside, we’re still in the game and we go to the Nou Camp with an outside chance of causing an upset. Stranger things have happened already this season as we’ve come away from both Turin and Paris with very unlikely victories having been given the run-around at Old Trafford. Surely it can’t happen again? Probably not, but I’ll be keeping everything crossed hoping for another freakish thunderbolt of divine intervention.

Leeds look like they’re getting promoted, City are set to win a domestic treble at the very least… and if they don’t then Liverpool will win the title. Both Liverpool and City are very well placed to reach the Champions League semi-finals. There’s a head-wrecking set of variables in place here that are pointing towards a testing next few weeks followed by a potentially horrific summer. It’s probably too late but we need to try and stop the unthinkable happening.

Help us, Ole Gunnar Solskjaer. You’re our only hope.