Most of my European travels with United were during the mid-nineties. After the ambition to see us win a league title was fulfilled, this was immediately succeeded by the desire to witness us crowned kings of Europe again. It therefore transpired that I ended up doing most of the trips on offer between ’96 and ’99, usually via UF Tours/Millwest and later, through Miss Ellies. That period fortunately coincided with the time when I was earning decent money for the first time, yet without facing the twin responsibilities of a mortgage and a family to support. I was in that all-too-brief, honeyed period in life where you can basically spend whatever you earn on whatever you like.

After the Nou Camp finale in ’99, things were getting serious with my future ex-wife and we’d (she’d) decided we were buying a place together. There seemed a nice symmetry to the fact that United had just won the biggest prize of all, so I voluntarily stated my intention to retire from European travel. A bold yet wholly necessary move since any disposable income for the foreseeable future was no longer my own – it was instead earmarked for house payments, an impending wedding and baby clobber. Real life had caught up with me.

Over the intervening years I’ve stuck to that vow pretty much, with only a handful of guest re-appearances. These days it’s a financial stretch to afford a season ticket each year and do a handful of domestic aways, never mind finding the cash to jet off round Europe with United half a dozen times a season. However, on the morning of the draw in December, a flurry of texts led to the decision that we’d be going to Madrid…and we weren’t just going to book it, we were gonna Thomas Cook it!

Doing the official trip in the company of the shirted up, butty box contingent is, of course, about as uncool as it can possibly get in Euro away traveller terms. But fuck it, the promise of direct flights and a nailed-on match ticket swung it so four of us duly signed up for the one night stopover – we were to fly out early on the Tuesday and return straight after the game in the early hours of Thursday.

Terminal 1 was as busy as anticipated on Tuesday morning, with plenty of familiar faces milling about and the bars doing a brisk trade. Most annoyingly, and to the sniggering amusement of my fellow travellers, it was my turn to get my possessions turned inside out (nothing wrong with owning a floral print wash bag in my opinion) before being treated to a full (external) body search. After such hilarity, the flight itself passed off without incident and we were soon touching down at Madrid Barajas.

An hour later we’d done the coach to the hotel, dumped our bags, necked the welcome drink and scoffed a plate of the ropey-looking paella our hosts had served up. My old man had been over for the 0-0 back in 2000 and recommended we do the ground tour if possible, so as it was still only about 1pm we decided to get the Metro up to the Bernabeu.

The scene outside the ground was very similar to what you’d see at Old Trafford the day before a game: TV crews setting up outside broadcast facilities and lots of Japanese tourists taking photographs. Inside the stadium, although impressive, the museum was more of an extended trophy room than anything, with Real seemingly having no problem in passing off honours won elsewhere as their own – Ronaldo’s Balon D’Or and Golden Boot of 2008 were each out on display.

After a couple of hours doing the tourist bit, it was time to start living up to our billing of ‘marauding English hooligans’ so we headed back into the centre to commence drinking. It was a great afternoon, I can’t really remember any precise details but recall visiting several tidy, backstreet drinking establishments and getting slowly pissed. Perhaps crucial to the relaxed tone of the day was that fact we managed to spend the entire afternoon without hearing another British accent.

By early evening we were ready for something to eat, and helpfully my mate had arranged a tour guide in the form of a female relative of his who’s living in Madrid whilst studying. Any expectations we had of being introduced a hot, young student were dismissed after he explained the lady in question was in fact in her early sixties. Nevertheless, Auntie Carol was sound as a pound and the tapas place where she’d opted to meet us was absolutely bang on. A few bottles of wine, great food and a couple of expletive-free hours later we were back out on the streets looking to sample the best night life Madrid could offer.

In reality of course, this meant we walked a couple of hundred yards to the nearest place that was showing the football. The boozer in question was an ‘Irish Pub’ (ie it sold Guinness) – but not so Irish that there were any Irish staff, patrons or indeed, were even showing the Celtic game. After a couple of hours holed up there we left in search of a change of scene. We were all pretty fucked by this point so set off walking back towards what seemed to be the main drag of the city centre, carefully negotiating the high-kicking prostitutes and kamikaze moped drivers encountered whilst en-route.

After sacking the idea of strippers and/or clubbing we instead settled in one of those curious, late-night drinking dens that seem native to Southern Europe – sort of a green grocers by day, fluorescent-lit shithole bar by night. Having walked in the five of us (we’d picked up a stray somewhere along the line) were immediately sought out for attention by half a dozen screeching, 50+ year old harridans from Hartlepool. Yes, Hartlepool.

One of our party was straight in there, beer goggles in full effect having convinced himself that one of these frightsome creatures was actually ‘alright’. She wasn’t. His chances didn’t last very long at any rate as he proceeded to do one of the best ‘Del Boy’ style fall-overs I’ve ever seen. It was spectacular – missed his chair completely and ended up doing a Tiswas-esque, ‘dying fly’ in front of the whole bar. In fairness to him though, if you’re going to lose all credibility in front of a woman, surely it’s better it occurs when chatting up a complete rotter he’d have spent a lifetime regretting? We got out before things went further downhill, jumped a cab and found sanctuary in the hotel bar for a nightcap.

Considering my last moments of Tuesday night were spent zig-zagging across reception before collapsing in bed with the room lurching around me, I woke up on the Wednesday feeling reasonably sprightly. Perhaps not exactly ‘sprightly’ then, but at least ‘not dying’. It was too early and we were all too rough to go straight back on it, so my suggestion to visit the Reina Sofia National Art Museum was only met with mild suspicion rather than hysterical laughter. I explained it would be something to do with a hangover so we set off, doing our best ‘four metropolitan sophisticates on a cultural excursion’ impression.

The Reina Sofia was top, if you are into art…which I’m not really, but I like to pretend I am a bit. Full of Picassos, Dalis and Miros and loads more modern, weirder shit too. It was only €6 to get in and proved a great place to wander round and kill a couple of hours. We’d only been in there about 10 minutes when we almost walked into a familiar looking figure…well, if it wasn’t Avram Glazer!

I’ll be honest now, none of us did or really said anything…though one member of our group sort-of emitted a low growl (he must have been terrified at that). He clocked that we had clocked him and his bodyguard gave us a suspicious look… but that was it. I’d love to report that I bowled over and went straight into an impassioned 20 minute diatribe about the evils of the takeover, but in truth I was in the kind of hungover state where I could barely think coherently, never mind speak. Pathetic I know, but there you go…

To cleanse ourselves of any lingering aestheticism, we left the Reina Sofia and went for a KFC before heading back into the centre to meet a couple of mates staying at a different hotel to us. By now the day trippers had landed and the quiet of the previous day had well and truly dissolved as the main squares became a sea of pissed up reds with the local police looking on menacingly. Not fancying an afternoon of singing, jumping up and down and showering each other with beer, we left them to it and set about finding somewhere to drink away from the classic Euro away soundtrack of police dogs barking and blaring sirens.

Wednesday was a lot warmer than the previous day so we found a nice spec outside a bar, sat in the sun and settled down to watch the Madrileni go about their business. Unfamiliar cities are great places for people watching of course, and several earth-shattering conclusions were reached throughout the duration of the afternoon. The Spanish, as a nation, are incredibly short. Spanish girls, in the main, dress considerably better than their English counterparts. Finally, indisputable proof was presented that Madridistas have great taste in dogs – we saw Dalmatians, Basset Hounds and Beagles all out on parade…not a mongrel to be seen. Truly remarkable scenes. 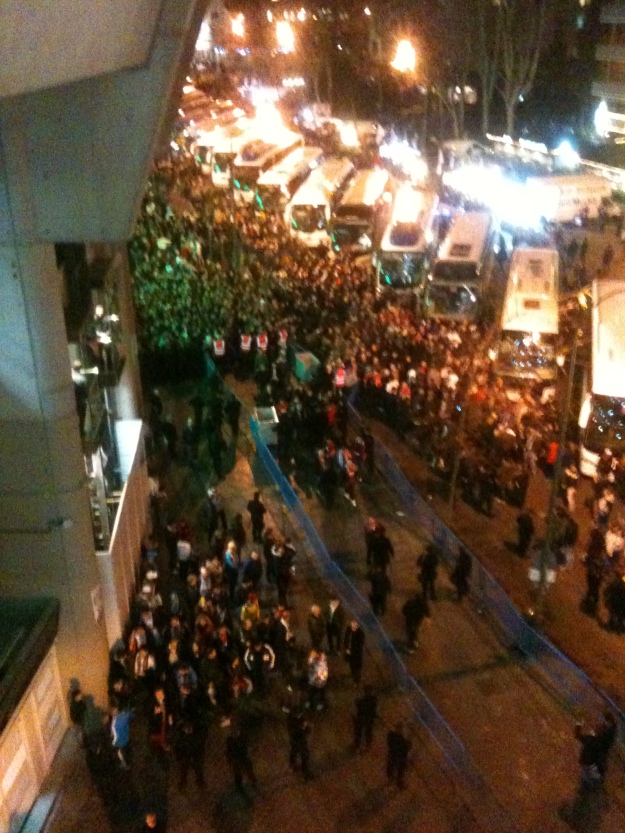 As dusk began to settle, the serious business of the day was put to bed and thoughts turned to the actual match. We arrived at the ground about an hour before kick-off with a view to grabbing a beer nearby, that idea soon abandoned when we saw the growing queues at the gates and the increasingly twitchy police presence. It was blindingly obvious that it would be chaos as kick-off approached so we joined the crowd and decided to get in early. I’ve not heard of anyone who managing the jib and would be stunned if people succeeded this time out, given there were at least 5 separate checks and searches prior to the actual turnstiles – probably a response to our last visit in ’03 when plenty got in with snides.

The match itself? Well you’ve all seen it. Possibly fortunate to be level at HT, United settled and looked more than comfortable during the 2nd half. Welbeck put in a magnificent shift, Jones did a creditable job and Kagawa was absolutely bobbins – all in all, mission accomplished and we look forward to the return leg.

After the game we got kept in for ages before filing out, locating the coach and heading back to the airport for lots more queuing and waiting around before the 2hr flight home – then back in the house by 4am for a much needed sleep. In conclusion: a fantastic couple of days. A great city where it was easy to swerve the bellends, nice bit of sun, ace food and wine, friendly locals (police apart) and a decent result too. Good stuff.