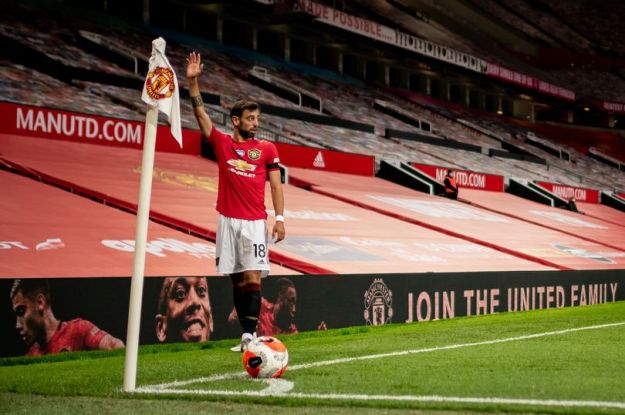 Having argued quite vociferously against the resumption of the Premier League, I’ll happily concede that it turned out to be quite watchable in the end. Winning helps of course. 11 rapid-fire games with United looking focused and determined for the most part. Despite being confined to watching on TV, I can honestly say I’ve enjoyed the last 6 weeks of football as much as anything in any period since Fergie retired. Not that that’s saying much.

The realisation hit me that watching football on telly shorn of the compulsion to attend in person (a growing trend in recent seasons, admittedly) is actually quite underrated. It’s an absolute doddle, this part-time supporter caper. There’s little stress involved, it doesn’t cost anything like as much as buying a ticket and you don’t have to mix with the ever increasing number of complete bellends who spoil the match day experience. Having spent nigh on 40 years looking down my nose at mere ‘fans’ and quietly revelling in my self-appointed top red status, it turns out the armchair lads are actually onto something.

I jest of course. Despite the novelty of watching United string a few wins together, it all had a hollow ring to it. We watched 6 weeks of walking-pace, contractual obligations being played out with piped in crowd noise to provide the illusion of authenticity. It was a bit like watching the longest post-season tour in history… or a particularly unmemorable World Cup where everyone knew who won before the draw was made. It was entertaining to a point and provided some relief after weeks of below-par crime dramas and basketball documentaries on Netflix, but let’s not pretend it was football. Not proper football, anyway.

The post-apocalyptic, Bizarro World version of the Premier League briefly afforded us the chance to make history. At one point it looked like we might be in with a shout of lifting the inaugural Covid League title awarded to the the team with the best record post-lockdown. Unfortunately we had to settle for 2nd place as dropped points meant City picked up the germ plated, commemorative trophy. This made it a Coronavirus double for the blues, still buoyant after their extra-time victory in the CAS Cup.

Despite paling in significance with the real thing, there was still plenty to digest. For the first time in a long time, a United manger successfully figured out his strongest line up and boy, did he decide to rinse it. As we limped over the finish line at Leicester the team was basically running on fumes. The only big disappointment came at Wembley where Ole justifiability gambled on resting a few players. That didn’t work out at all as the performance showed. We’re still in need of further reinforcements clearly, but that single setback shouldn’t detract from the progress made since January.

The main reason for the improvement is Bruno Fernandes. Not only has he arrived and made an excellent contribution himself, his enthusiasm appears to have had a positive effect on everyone else around him. The attitude of many of the squad has been questionable, both collectively and individually for a number of years. Fernandes comes in and it’s like they’re trying their best to impress the new kid in school who everyone agrees is cool. Shaw is moving up and down the touch line faster, Matic looks halfway mobile and perhaps most shocking of all, Pogba has declared himself match fit.

In the final game at Leicester, Bruno looked absolutely shattered after 10 minutes. He still didn’t stop all afternoon despite the feet no longer doing what the brain was telling them to do. Having a player like that in the team, a proper natural leader actively looking to take responsibility rather than shirk it is absolutely priceless. His head doesn’t drop and he leads by example, every single game. He might not be THE captain, but he’s A captain. Successful football teams tend to have 4 or 5 players demonstrating these qualities.

Despite quickly becoming the star turn, it’s not been all Bruno. Ole deserves a lot of credit for the way he’s used Mason Greenwood this season, integrating him slowly into the set up and knowing precisely the right moment to unleash him as a first choice starter. Greenwood himself is something else. 17 goals for an 18 year old, 3rd choice striker is a ridiculous return in his first season. It’s not just the goal return though. As he’s shown already, he’s a very capable all-round footballer.

The decision to shift Lukaku in order to give this kid more game time doesn’t seem so controversial 12 months on. Unlike the human water buffalo, Greenwood is great with the ball at his feet and supremely comfortable in possession. He knows when to do the simple things and when to attempt the extraordinary. There’s no need to blow any more smoke up his arse right now because we all know how talented he is. It’s hard not to get excited about how good he could be in a few years if he continues to develop as he has throughout this season.

Coming up next we’ve got more televised summer football in the form of the Europa League’s conclusion being played over in Germany. It’ll be a bittersweet feeling should United progress to the final (not a foregone conclusion by any means) as European finals are those occasions where you feel compelled to be there. I’ll be made up for Ole if he wins his first trophy as a manager but it won’t be the same without 40,000 reds ballooning round Cologne to mark the occasion. I suspect town could be interesting that night though.

In the same way that Liverpool’s title win became inevitable months ago, I’ve reached a similar conclusion about the prospect of City winning the European Cup later this month. It’s going to happen sooner or later so it may as well be this year. Liverpool are champions and Leeds have won promotion so I figure we take the hit and make it an annus horribilis hat-trick. They won’t be able to experience it properly and it’ll be the worst final in living memory regardless what happens. At least our blue brethren will be spared the usual scramble for excuses after they fail to sell out their allocation. Every cloud and all that.